Of course I have a sense of humor. The Happy Monday series is about to celebrate two years and 100 posts and shares plenty of funny captioned pictures that are not necessarily accurate from a technical point of view. Captioning funny cat or dog pics is one thing; we need to be a little more careful when it comes to handling theology. There have always been quotes and statements people mistakenly attribute to the Bible (This too shall pass, Money is the root of all evil) but in this day and age of sharing and re-posting we spend less time fact-checking than ever before. Reposting incorrectly captioned pics of the president or falsely ascribed Ben Franklin quotes are one level of misconception, sharing inspirational statements about our faith or even misquoted verses of scripture is something else. When we point and click all day every day but never actually read the Bible we run the risk of of not rightly dividing the Word of Truth without even realizing it. Maybe the bear pic is funny and I need to relax, but this one actually bothers me: 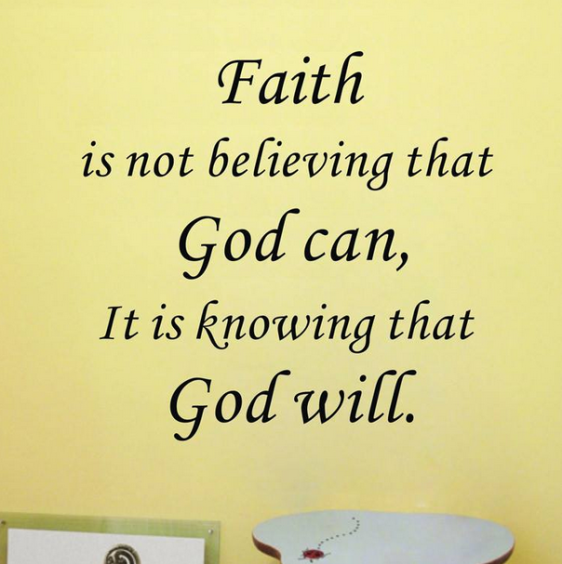 Faith is more than belief, it’s a belief that motivates one to action. You may heard that believing a chair will hold your weight is one thing and actually sitting down comfortably is another. And just because you put faith in something doesn’t mean that person or thing is worthy of your faith and does not guarantee you will not be disappointed. The above quote is inspirational but not scriptural. I would classify it as “name it claim it” theology because not only are these words not found in scripture they are actually contrary to scripture. The poster is scripturally unsound and potentially misleading.

I recently wrote about the Fourth Man in the Fire who appeared after Shadrach, Mechach and Abednego were thrown into the fiery furnace. Look again at their statement of great faith in response to King Nebuchadnezzar’s threat:

Shadrach, Meshach, and Abednego answered and said to the king, “O Nebuchadnezzar, we have no need to answer you in this matter. If this be so, our God whom we serve is able to deliver us from the burning fiery furnace, and he will deliver us out of your hand, O king. But if not, be it known to you, O king, that we will not serve your gods or worship the golden image that you have set up.” Daniel 3:16-18

They had faith that God could but not necessarily that he would. As a matter of fact God did not deliver them from the king, a fact that did not cause the young men to loose faith. Rather than deliver them from the fire God was present with them in the fire. When they came safely out of the furnace Nebuchadnezzar acknowledged their God and worshipped him. They were promoted in Babylon and a decree went out from the king that if anyone spoke against the God of Shadrach, Meshach, and Abednego they would be torn limb from limb. God demonstrated his power and was acknowledged by the king, satraps and governors of Babylon because he did not deliver them from the fiery furnace. He had even greater things in mind.

God works all things together for good, often times behind the scenes in ways we don’t see or understand. God explains his plans to Abraham in Genesis 15 that take place over the next 400 years. Joseph did not fully see or understand while he was being sold into slavery or cast into prison by Potiphar but he explained to his brothers that God used those events for good and many people were saved alive from the great famine. Moses did not understand all God was doing and argued with him at the burning bush, eventually asking him to please send someone else. Yet all of these events together, from Genesis 38 to the Book of Joshua, accomplished what God promised Abraham.

Faith is knowing God can. Real faith is believing that God knows what he is doing and that we should pray for his will to be done and not ours.