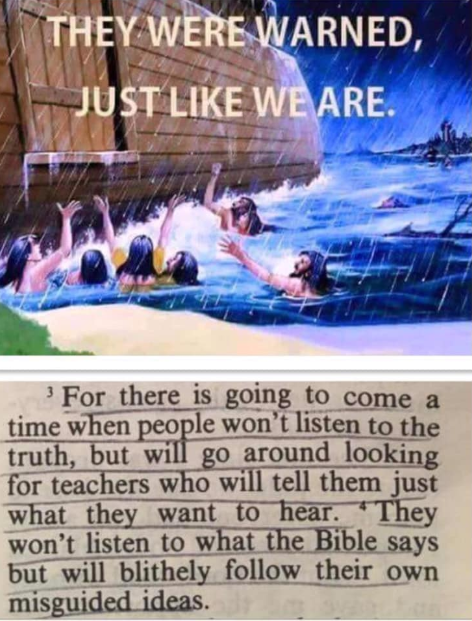 I saw this image on Facebook last evening. This comparison is often made to encourage listeners to heed the warning of God’s coming judgement. Let’s ignore this awkward translation of 2 Timothy 4:3-4 which actually uses the word Bible and focus on the caption at the top of the picture. “They were warned…” Were they though?

As I was making mental notes and forming an outline, I decided to check the archives to see if I had written on this topic before. Not only did I find a post I read through and realized it’s pretty good. Below is the full text of a post originally titled Did Noah Preach? posted March 30, 2014.

I was reading Jon Bloom this morning at the Desiring God blog. The title of the post is The Folly of what Noah Preached and it compares the message preached by Noah to the New Testament sermons of which Paul said “For the word of the cross is folly to those who are perishing, but to us who are being saved it is the power of God.” (1 Corinthians 1:18 ESV) He draws a parallel between Noah’s sermon to repent and get on the ark and our sermon to repent and believe in the Gospel of Jesus Christ. In both cases judgement was announced and a plan of salvation offered.

Desiring God is one of the few blogs I read that does not allow readers to comment. So here is my comment: I can’t find evidence that Noah preached any such sermon. It’s just not in the Bible. Bloom’s post is based on Hebrews 11:7 which reads:

By faith Noah, being warned by God concerning events as yet unseen, in reverent fear constructed an ark for the saving of his household. By this he condemned the world and became an heir of the righteousness that comes by faith. (Hebrews 11:7 ESV)

Noah’s act of building the ark, following the commands given by God, condemned the world. Hebrews 11:7 points out the ark was built to save his household. The Genesis flood account doesn’t say anything about him warning others, preaching of the coming flood, nor even discussing it with anyone outside of his family. The Genesis account is quite clear that God’s intent was to wipe all living things from the earth with the exception of Noah and his family. Think Sodom and Gomorrah with the provision that Lot and his family were allowed to leave. Please refer to Genesis 6,7 and 8 but consider the following:

For behold, I will bring a flood of waters upon the earth to destroy all flesh in which is the breath of life under heaven. Everything that is on the earth shall die. But I will establish my covenant with you, and you shall come into the ark, you, your sons, your wife, and your sons’ wives with you. (Genesis 6:17-18 ESV)

Then the LORD said to Noah, “Go into the ark, you and all your household, for I have seen that you are righteous before me in this generation. (Genesis 7:1 ESV)

God established a covenant with Noah, before construction of the ark ever began, that only he and his family would enter. I did a little digging to see what others thought on this subject. Answers in Genesis has written before on Noah the Evangelist. They draw some conclusions that are based in reason and logic, but that doesn’t mean the events actually happened. Consider:

However, they were informed that there was indeed going to be a Flood…quite likely, from the words of Noah himself.

One can imagine that Noah was often asked about his construction project. Indeed, it is likely that he was mocked for such an enterprise.

I can imagine a lot of things. The Bible never says anyone was informed there was going to be a flood. As a matter of fact in Matthew’s Gospel Jesus is preaching about the last days and says “For as in those days before the flood they were eating and drinking, marrying and giving in marriage, until the day when Noah entered the ark, and they were unaware until the flood came and swept them all away… ” (Matthew 24:38-39) Speculation tells us they were informed that there was going to be a flood; Jesus Christ preached they had no idea. Which are we to believe?

Answers in Genesis does provide some evidence that Noah preached an invitation to join his family on the ark, based on some ancient Jewish traditions.

However, some Jewish scholars maintain that Noah did indeed leave some words, too. John Gill, in chapter 22 of the Pirke R. Eliezer, quotes Noah’s words according to Jewish tradition: “Be ye turned from your evil ways and works, lest the waters of the flood come upon you, and cut off all the seed of the children of men.” If this extrabiblical source has any truth in it, then Noah is asking for people to repent…

If this extrabiblical source has any truth in it; That seems to me like a big if, especially when the Bible not only doesn’t mention it but says the contrary is actually true. The only biblical ref. to Noah as “preacher” found in 2 Peter 2:5: if he did not spare the ancient world, but preserved Noah, a herald of righteousness, with seven others, when he brought a flood upon the world of the ungodly; (2 Peter 2:5 ESV) The Greek word kerux (κηρυξ) refers to a herald, or “one who announces.” King James and other translations render the word preacher in that verse, the ESV quoted above does not.

No verse in the Bible says Noah warned of the flood or suggested anyone besides his family get on. God explicitly tells Noah that he and his family will get on the ark and every other living thing, man and beast, will be destroyed. Why do many preachers and Bible teachers still claim that Noah preached a message of invitation for 120 years that no one responded to?

2 thoughts on “With or Without Warning”