Paul Wilkinson blogs at Thinking Out Loud and Christianity 201. We have been blog friends for several years, having met up in the Christian blogosphere but never in real life. Jimmy Humphrey is a new blog friend, the author/podcaster at Jimmy’s Table. Paul lives in Canada, Jimmy just up the map a little ways in North Carolina. Tuvia Pollack is a blog friend from way back that we haven’t mentioned in a while; so I am going to mention him now.

Back in the day, Pollack had a WordPress blog titled “That Dude You Know.” For a long time that was the only moniker I knew him by. Most of our interaction these days is on Facebook, partly because I went through a blogging dry spell during which time I contemplated shutting it down. But enough about me. My online friend Tuvia Pollack lives farther away than North Carolina or Canada, on the other side of the Atlantic Ocean in fact. An ethnically Jewish Christian, he moved his family from Sweden to Jerusalem, Israel. He is slightly embarrassed by being fluent in only three languages – Swedish, English and Hebrew – but I think that’s pretty awesome. Many of my friends post family pics around Easter and Christmas, he’s the only one that dresses up his kids for Purim.

Here is his website/blog which includes links at the bottom of the page to his Facebook, Twitter and Instagram profiles. An article he wrote, Should Christians Study Rabbinic Literature, was recently published by Kehila News Israel. Take a look at that, and I will be adding him to blogroll like I should have a long time ago. He is a great guy that will gladly offer you a cup of coffee (but does not play the nose flute). 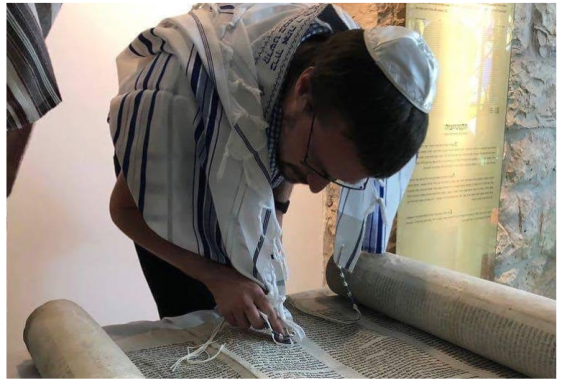 Reading from a 17th century Torah scroll. Click image to link to source.

Jesus said to her, “I am the resurrection and the life. Whoever believes in me, though he die, yet shall he live…”
John 11:25