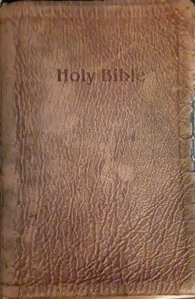 When I showed my mother the new Bible I got for Christmas (part 1 if you haven’t read it) she mentioned needed a new Bible. Mom still carries the same Bible that Dad gave her back in the late 1980’s. She keeps it in a cover which may have been replaced a time or two. The Bible inside is over 30 years old and has pictures, newspaper clippings and notes from grandkids stuck in between the pages here and there. She wanted to know if my new Bible was a “real Bible” or something else. I knew exactly what she meant. That comes from spending a lifetime with a KJV only husband/preacher.

I mentioned yesterday having a shelf full of Bibles. Many of those are KJV including the Bible I was given by Sammy Allen (local Gordon County residents will recognize that name) on June 19, 1988. It was the first night of Jubilee at Maranatha Baptist Church and “Brother Sammy” was there to kick it off. I was saved that night at the age and 12 and he had several Thomas Nelson KJV Bibles with him for sale. He handed one and told me I could have it on the condition that I read it. I carried that Bible through middle school, high school and college, retiring it from service only when A.J. Waters and the House of Prayer presented me with a new Scofield Reference Bible as a college graduation present.

A full bookcase is a fine thing for a library, office or pastor’s study. But half a dozen Bibles arranged neatly on a shelf and never being read is an impractical waste. When Mom said she needed another Bible I knew I had quite a few on a shelf not being read. That KJV from Thomas Nelson started out with a red leather cover that faded to pink over time and eventually to whatever washed out color it is now. I read it all the way through more than once over the years; I taught Sunday school from it in the early 90’s and was preaching from it when I announced a call to the ministry. But I’ve had a few Bibles since then. If Mom needed a Bible to read, why keep that one in a museum collection? I did the right thing and took her to my office. We looked at Dad’s giant Scofield which is too big to carry anywhere (even though he did). I showed her my grandfather’s Bible and a couple of others. But I knew ahead of time which one I was giving her. 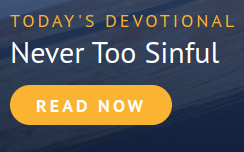 Therefore do not throw away your confidence, which has a great reward. For you have need of endurance, so that when you have done the will of God you may receive what is promised.
Hebrews 10:35-36