The Bronze Serpent
4 From Mount Hor they set out by the way to the Red Sea, to go around the land of Edom. And the people became impatient on the way. 5 And the people spoke against God and against Moses, “Why have you brought us up out of Egypt to die in the wilderness? For there is no food and no water, and we loathe this worthless food.” 6 Then the Lord sent fiery serpents among the people, and they bit the people, so that many people of Israel died. 7 And the people came to Moses and said, “We have sinned, for we have spoken against the Lord and against you. Pray to the Lord, that he take away the serpents from us.” So Moses prayed for the people. 8 And the Lord said to Moses, “Make a fiery serpent and set it on a pole, and everyone who is bitten, when he sees it, shall live.” 9 So Moses made a bronze serpent and set it on a pole. And if a serpent bit anyone, he would look at the bronze serpent and live. Numbers 21:4-9

So if you were bitten by a fiery serpent, all you had to do was look at the bronze serpent set on the pole in order to live and not die. We are not told how obedient Israel was in this matter but we can safely assume that some people did just that while others failed to believe it would make any difference… and died anyway. Like I say, we don’t know that for certain but we are given many, many examples of incomplete obedience. Now consider the parales: the fiery serpents represent sin. Because of our sin nature from birth we are all “bitten” by it and will die. All one must do to live is look in faith to the Lamb of God lifted up on the tree at Calvary. Look up and live, it’s as simple as that. And just in case it were possible to miss the symbolism of this Old Testament story, consider these words of Jesus:

And as Moses lifted up the serpent in the wilderness, so must the Son of Man be lifted up, that whoever believes in him may have eternal life. John 3:14-15 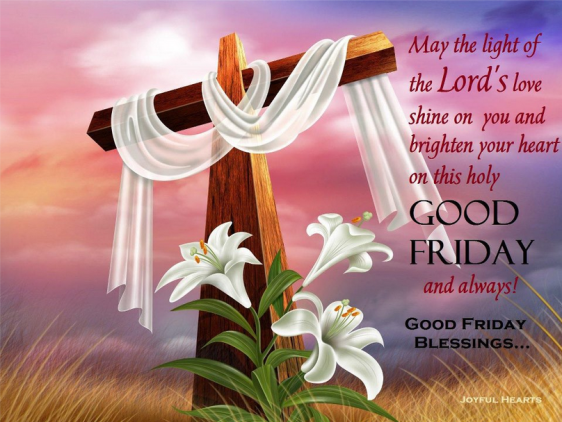 If this is the day Jesus died, why is today good?

In the sense it is used good means holy when we say Good Friday. It is also called Great Friday, Holy Friday and Easter Friday in other traditions around the world. This is the day we commemorate Jesus as the atoning sacrifice. Holy Week is a time of preparation and consecration that seeks to take things one step at a time. Don’t jump ahead to the celebration; today is about the sacrifice of the Lamb of God. Today we observe the crucified savior. If you’ve been reading the Gospel accounts all week, save that last chapter for Sunday. END_OF_DOCUMENT_TOKEN_TO_BE_REPLACED

The Bible records several different occasions on which Jesus prayed. He taught the disciples to pray, though the Lord’s Prayer is something of a misnomer; we should rightly call that the Model Prayer or even the Disciples Prayer. Jesus always spent extra time in prayer before a big event, sometimes praying all night. He regularly went out alone very early each morning to pray, and even though he had some harsh words regarding public prayer we have a few of his prayers recorded, including the High Priestly Prayer of John 17. But every year at this time there is always one in particular I come back to. END_OF_DOCUMENT_TOKEN_TO_BE_REPLACED

There are many well-known passages of scripture that make their way onto Christmas cards and into sermons this time of year. Prophesies of Isaiah and Micah foretelling the Messiah are common, and the birth of Jesus is recorded in the gospels of Matthew and Luke. While Christmas celebrates the birth of the Christ child, there’s a lot more going on than just a birthday. The incarnation is about God robing himself in flesh. Emanuel is God with us, and the New Testament has much more to say about the incarnation than it does the night it happened.

He is the image of the invisible God, the firstborn of all creation. For by him all things were created, in heaven and on earth, visible and invisible, whether thrones or dominions or rulers or authorities—all things were created through him and for him. And he is before all things, and in him all things hold together. And he is the head of the body, the church. He is the beginning, the firstborn from the dead, that in everything he might be preeminent. For in him all the fullness of God was pleased to dwell, and through him to reconcile to himself all things, whether on earth or in heaven, making peace by the blood of his cross. (Colossians 1:15-20, ESV)

END_OF_DOCUMENT_TOKEN_TO_BE_REPLACED

Joy Williams is a celebrated Christian singer/songwriter. She released Here with Us in 2005. Some how, some way, I had never heard it until last year. The video above combines her song with images from The Nativity and the mini-series Jesus of Nazareth. Christ coming into the world is cause for celebration, but don’t loose sight of the fact that… he came to die. END_OF_DOCUMENT_TOKEN_TO_BE_REPLACED

END_OF_DOCUMENT_TOKEN_TO_BE_REPLACED

When Jesus taught his followers how to pray, he gave them a simple formula (such as in Matthew 6).  We often called this the Lord’s Prayer, but Model Prayer or even Disciples’ Prayer would be more descriptive.  Here are three prayers Jesus himself prayed during Holy Week.

The High Priestly Prayer (John 17) This entire chapter is a prayer spoken by Jesus that we call the High Priestly Prayer.  The writer of Hebrews goes to great lengths to detail the ways Jesus acts as our high priest, continuously going into God’s presence and making intercession on our behalf.  His prayer in John 17 casts Jesus in the role of High Priest, bridging the gap between man and God, between the unholy and Most Holy.  Jesus has only a few days left on earth at this point in the story, and is about to take his place at God’s right hand.  Jesus prayed for his followers of that day and all that would ever believe and follow in the future.  Jesus literally prayed to God for us. END_OF_DOCUMENT_TOKEN_TO_BE_REPLACED

END_OF_DOCUMENT_TOKEN_TO_BE_REPLACED

Hello friends!  I had a busy week (and one very, very sick day) and blogging was just not a part of it.  Here’s a short Happy Monday post, and hopefully we’ll be getting back to our regularly scheduled programming.   God is good all the time, all the time God is good. 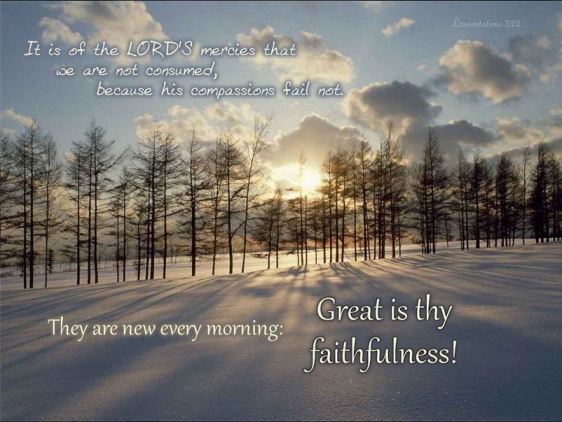 The picture below was taken in north-west Georgia as Samaritan’s Purse workers leave their mark during relief efforts following a recent tornado.  If you have to have a stump in your back yard…

If you want to know how much God loves you, look in the manger. 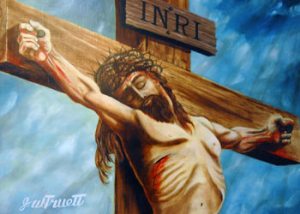 If you want to know how much God hates sin, look at the cross. END_OF_DOCUMENT_TOKEN_TO_BE_REPLACED